The first is one that's been on the back burner for some time now.  Earlier this year DD2 said she'd like fingerless mittens and a matching cowl.  The mitts were no problem, and she was able to wear them a few weeks later in March. 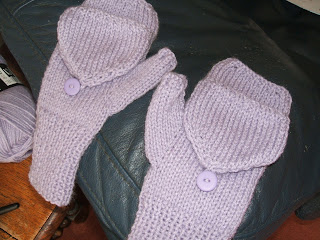 Unfortunately, the cowl has been another story. 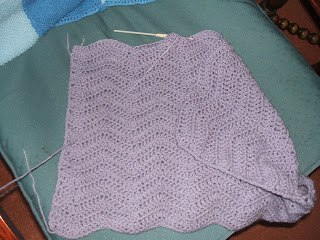 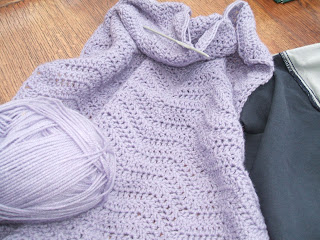 Two probs - the first is, it's really boooorrrrrrrrriiiiiiiinnnnnnnnnngggggggggggggg!!!!!!!!  My previous ripple attempt was a multi-coloured baby blanket (the blanket, not the baby!) so I was encouraged by the frequently changing yarns.  The second is, I've decided it's too wide but am at the stage where I can't bear to rip it out and start again, so need to persevere to the very bitter end.

Hey-ho, I've plumped for keeping it view so that I often pick it up, and will just break the monotony by doing other quick things in between, and at least be able to give the cowl in time for (this) Christmas.  With the extra time retirement has given, I'm also determined to tackle all the unfinished pieces in the cupboard

The second labour of love is new pockets for DH's 'at home' trousers. 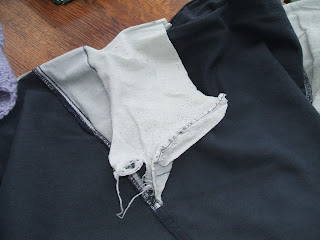 Given his request (see previous post) for no flowers or frills on his pencil case, I'm tempted to put daisy or teddy fabric in as pockets (just not sure he'd appreciate the humour, and I wouldn't want to do the job twice!)  Some more thought required here as it's not as straightforward as I'd hoped.

Posting this over on http://stamping-ground.blogspot.co.uk/2012/10/woyww-176-really-176.html  Put your feet up with a cuppa, if you've time, and have a nosey at what everyone else is up to.

Chris xx
Posted by Chrysalis at 23:04

Chrysalis
Hi - welcome to the world I share with my husband and two dogs, I'm a Christian, retired from paid work, and mad about all things crafty. My blog title? I just LOVE teddies ... flutterbies? I'm fascinated by most handicrafts, DIY, gardening, etc., and my problem (well, one of them) is that I want to try them all, and I flit from one to another. This means I'm usually in my element but it can be a bit wearing for my very understanding husband ... and Chrysalis? It's a nickname formed from my names Christine Elizabeth, which my favourite uncle gave me when I was a tiny!

Flutterby Inspiration and Talent to Die For!